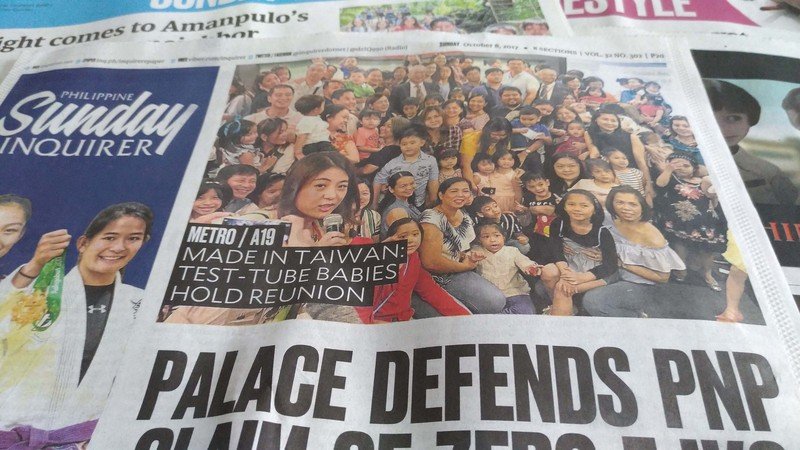 On the 8th of this month, the Filipino mainstream English newspaper “Philippine Daily Inquirer” published the news of test-tube baby reunion event held at the “2017 TAIWAN EXPO IN TEH PHILIPINES” on October 1st on the front page, within the expo, several Filipino mothers shared experiences and moods, the expo also brought more than 200 “made in Taiwan” test-tube babies together from the Philippines.

The“2017 TAIWAN EXPO IN TEH PHILIPINES” was held in Basel City, Metro Manila 2 weeks ago, the Lee Women’s Hospital in Taichung also hosted a grand reunion event for test-tube babies. The national policy advisor, deanLee Mao Sheng also attended to the event.

The Philippine Daily Inquirer reported the event on the front page, accompanied with large color figures.

The news titled “Made-in-Taiwan test-tube babies reunite in Philippines,” quoted Maybelyn Fernandez, a Dagupan City Councilor, northern Philippines, saying, “We feel blessed to have met Dr. Maw Sheng Lee. He gave us hope, he convinced us not to give up even after other doctors had turned us down.”

Fernandez, a former Filipino artist, has been married for 9 years and frustrated by her inability to conceive. Even though other doctors have given up, Taiwan's medical technology still allows her to give birth to her own child.

Eden Familara, another mother who waited 13 years to conceive successfully, said: “Every woman wants to be a mother ... it feels like winning the lottery jackpot, we are very excited.

The Daily Inquirer of the Philippines quoted Taipei economic and cultural office in Philippine as saying that Taiwan is considered a regional pioneer in ART (artificial reproductive technique) and its IVF costs are lower by half compared to rates in Hong Kong, Thailand or Singapore.

According to Taipei economic and cultural office in Philippine, the hospital has given birth to more than 500 test-tube babies through in vitro artificial insemination technology. Since 1986, it has served about 700 Filipino couples.

On October 1st, more than 200 “Made in Taiwan” Filipino test tube babies accompanied by their parents attended to the test-tube babies reunion“”. According to reports from the Filipino media, Taiwan's medical technology once again became famous overseas.

Taiwan ’s representative in the Philippines, Gary Lin, told the Central News Agency that Taiwan ’s soft power has improved the lives of many Filipinos. We can realize that the greatness of Taiwan lies in the vitality of the peoplewhich the government should use thoroughly when seeing these mothers holding their precious babies.